Looks like I am in another unusual situation that is costing me money. I seem to have a knack for finding myself in these spots. And yet again I am the lucky one who gets to be the torchbearer for the cause. Let's get started.

What is the situation with CETC?
Let's first start off with defining the company. Hongli Clean Energy Technology Corp (CETC) is a Chinese reverse-merger company—these are usually pretty sketchy companies at best and outright scams at worst (see the documentary The China Hustle). They used to be known as SinoCoking Coal and Coke Chemical Industires (SCOK). I remember way back in the day SCOK trading from $5 to $45. These companies used to attract all kinds of speculative fervor until they were exposed by Muddy Waters and other short sellers, and then it died down. But I digress.

CETC was experiencing a few problems at the time:


Needless to say, these are not the hallmarks of a well-run, profitable enterprise. 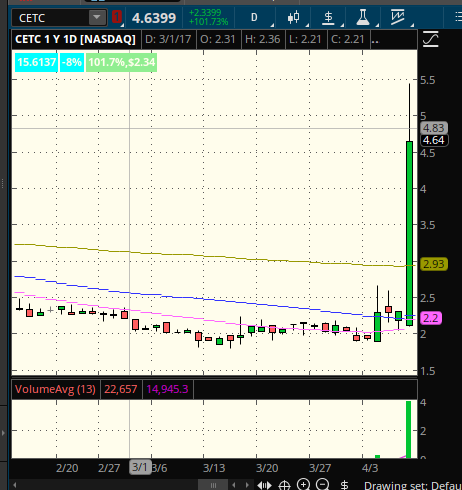 Traders, including myself, shorted the stock, betting the price would eventually go back down. Junk stocks that spike for no reason happen all the time and they usually do come back down.

At 12:15:58 Eastern Time, the price stopped moving. The Nasdaq had halted the stock for an "additional information request". These exchange halts are often to a response to unexplained speculative activity in "risky stocks". On the same day, the Nasdaq sent a Determination letter notifying the company of 1) the intent to delist the stock from the Nasdaq Capital Market and 2) the indefinite suspension of the trading of the company's stock due to its failure to comply with Nasdaq Listing Rule 5250c—the requirement to file timely financial reports with the SEC.

On October 6th 2017, CETC's common shares were officially delisted from the Nasdaq. It was removed from Nasdaq's official trade halts page and is no longer considered a halted security.

The stock currently has no market. There is no way to close out a long or short position on the stock. The stock just exists in this weird limbo right now. It's just a piece of paper that cannot be exchanged for anything.

So what is the problem?
The problem for short sellers is two fold.

1) With no market, there is no way to close out the security. Your money is tied up indefinitely due to the lack of a proper liquidation process.
2) Most (but not all) short sellers are on the hook for the short loan interest on the stock. You're effectively paying interest indefinitely on a security that no longer exists.

I have 6792 shares short of CETC. $33,960 in cash has been held as collateral for the position. I have since withdrawn the rest of the money and shut down all trading activity on the account. I guess the account isn't truly closed as long as this position exists on paper and I am still receiving statements.

I am getting charged almost $700 every single month in interest. 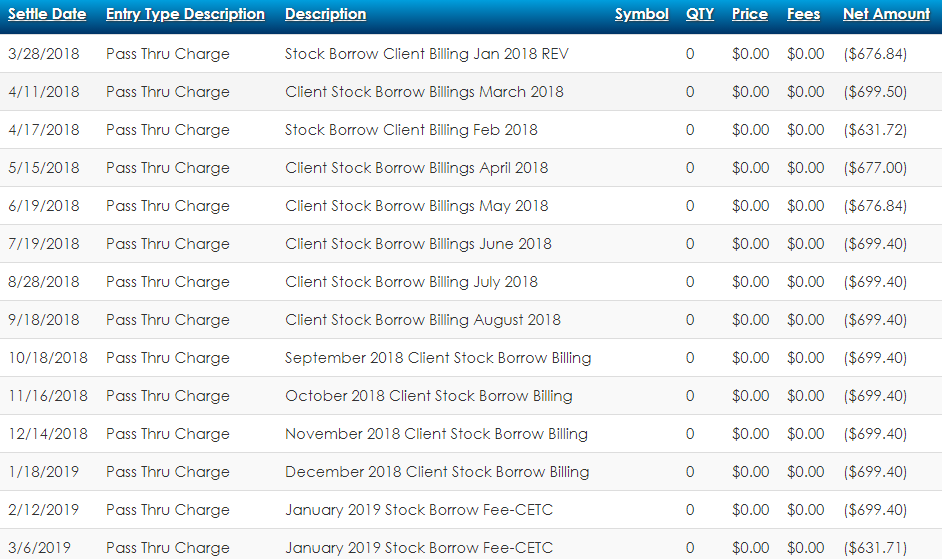 This situation has existed before and was covered by Bloomberg's Matt Levine in this article:

What broker is my position on?
Centerpoint Securities, clearing via ETC or Electronic Transaction Corporation.

Some traders are understandably frustrated with how these two parties have handled the situation. Having been a customer at Centerpoint since 2013, I'd like to think they are making a good faith effort towards rectifying this situation. I had an issue with them when LFIN was halted last year. I was short deep-ITM call options, the position was exercised (and thus my short call turned into a short stock position) without a proper update on my platform blotter, and I was on the hook for a very steep interest rate when the stock was halted. I wrote them a letter and they made good on the interest amount in question, as a gesture of good will. I don't know management well but their support team has always been prompt, professional, and respectful.

However, I cannot vouch for ETC. I don't really know what's going on them or what their internal policy is. Centerpoint has been going back and forth with ETC for me like a game of telephone. Here is what I do know:
Draw your own conclusions.

You said "not all" traders in the same short are being charged interest. Who are these traders?
One trader who is clearing via Goldman Sachs. The prop firm I used to trade for clears through Goldman Sachs and I can confirm that they did not charge any traders for the period in which WINS was halted. How Goldman has the leeway to not charge interest while other firms do not, or whether they have only done this as a courtesy for relationship management purposes—I cannot answer.

There is another trader who is short a small position at a different broker that also clears through ETC. I have asked him to show activity statements to corroborate and he has. I don't know if this is a mistake or by design and at the moment I cannot explain this discrepancy. I am currently trying to contact this firm so hopefully I can provide an update here.

I will also add that traders at T3, Vision Financial, and Cobra Trades who are in the same position are also being charged indefinitely.

Who is the money going to?
The money is supposed to go to shareholders who are loaning out the stock. I think some percentage of the interest goes to the clearing firm that cleared the stock borrow, but I'm not 100% sure on that. I'm trying to get more color on this.

(Update: my broker has told me none of the money goes to them or the clearing firm)


What's going to happen when your balance goes to zero? Will you still be charged?
To me, this is a scary unknown. My broker has not clarified what exactly will happen when the interest finally drains my account equity to 0. If some party is willing to go after me at that point... well I don't even want to think about it.

Why can't the broker just find a corresponding long position willing to match his position with your short position at a mutually agreed upon price?
This is a common suggestion and one of the first solutions I initially suggested when this happened. Here is the answer from my broker's representative:

You can't cross the position out because since its halted you cant put prints on the tape.

Traders at Interactive Brokers may want to look into the Special Position Liquidation Agreement, as it was explained to me they have a mechanism to match positions in these unique circumstances.

Why won't ETC mark the position to 0 like Goldman did?
Here is the answer from my broker:

It's currently not being marked to 0 because the DTCC has not made it ineligible.

Why can't the DTCC make it ineligible?
Here is the answer from my broker:

FINRA was contacted and indicated we should work with DTCC.  As you can see, DTCC is looking into this. In the past DTCC was not able to deem it worthless since the security has a Transfer Agent.

Why can't the Transfer Agent simply withdraw his services?
Here is the answer from my broker:

ETC is saying because they also have the longs, the agent has an obligation on that side as well, and long holders still know the last price as 4.64

The Transfer Agent on CETC is Interwest Transfer Company, Inc, who has since been acquired by Issuer Direct.

Can you move your position to another firm that doesn't charge interest?
Moving the position is possible. Finding a firm willing to do this out of the kindness of their heart is another issue. Opening an account with Goldman Sachs, if they would even agree to any of this, would likely come with an expectation of future business and a high minimum deposit.

My broker said this has been done before and the trader ended up being charged simultaneously at two firms because the actual borrow could not move over the books—so that's a risk as well.

Are there any legal options?
There is a class action lawsuit spearheaded by Rosen Securities. One trader reached out to them and indicated to me they weren't much help. Unfortunately a lot of these lawsuits are ultimately just for lead generation rather than a serious pursuit.


Some people have suggest some kind of FINRA arbitration. Some have suggested suing one of the regulatory agencies like Nasdaq. I don't know how viable these options are. I plan on speaking to a securities lawyer soon.

Suing management directly would be difficult. To make a claim, you must serve with process, which is close to impossible if they are in another country.

Why can't they just list CETC on the Pink Sheets or Gray Sheets, like they did other worthless fraud Chinese companies?
I think CETC's management has to file the proper paperwork for that to happen and they basically disappeared. They don't seem to care about having an exit for their worthless securities, even if it would end up being pennies on the dollar.

It is possible this is all a nefarious scheme specifically designed to milk short borrow fees in perpetuity but so far I have no evidence to corroborate this theory. The simpler explanation is that weird unintended consequences just happen in our complex world and nobody knows what to do or who is supposed to handle it.

I need more color on this issue and hopefully can find an update soon.

Does the SEC have any role in this?
On September 18th 2018, the SEC issued an Order Instituting Proceedings against CETC and 2 other companies. There is supposed be an imminent update on these proceedings. I don't know if these proceedings will fix this issue, it seems to be a punitive order against the companies themselves.

Why is this allowed to happen?
This seems to be an issue that needs systemic reform. Nobody seems to know what to do or how to implement a fair solution. One party passes the buck to another and we spin in circles. There used to be something called a Worthless Securities Working Group, with the purpose of achieving reform on this issue, but it has since disbanded.

Right now it feels bleak because it's hard to visualize what the actual solution is supposed to be. It will take some patience. But it's somewhat encouraging to see all these traders come out of the woodwork and share whatever they can with me. The first step is putting the problem out there for everyone to see.

Unfortunately that's all I have for now. I will update this when there's new information.
Posted by Pete at 5:00 PM