I'll Have One Dip Buy, Please.

Greetings everyone. I hope you're all having a fabulous holiday week.

As I'm sure you are aware of, the S&P 500 is currently down 600 handles from the all time highs and this will very likely be the first year we close red since 2008. 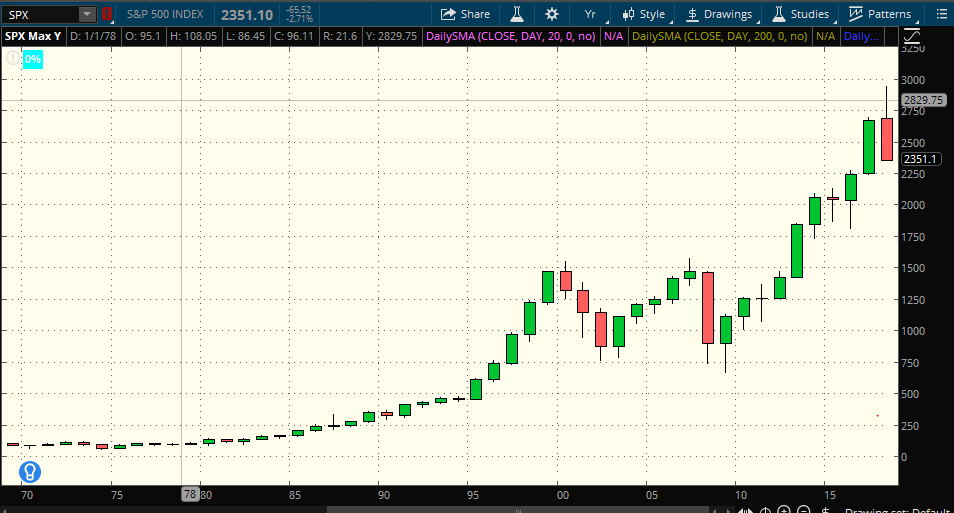 This is the daily chart: 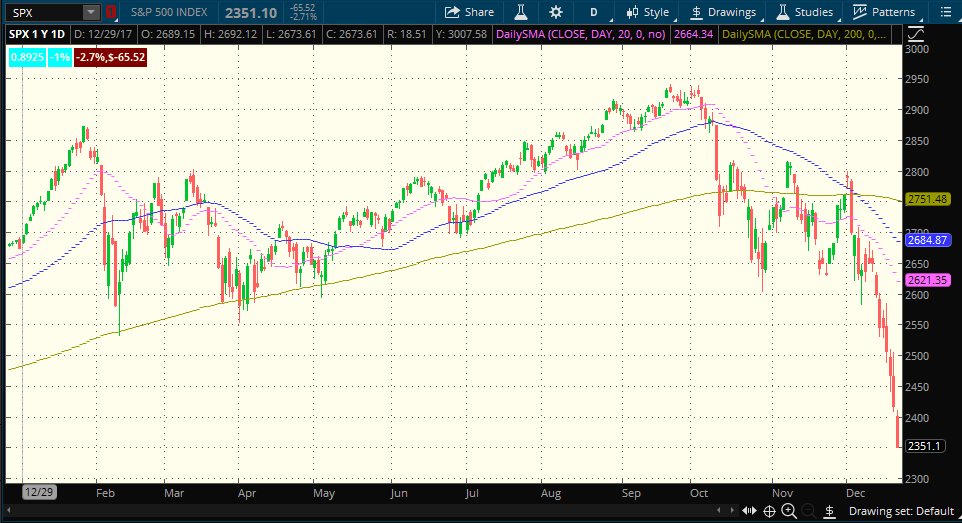 I hope this is not ruining the holiday cheer for anyone, but if it is, here's the good news:

I know what play I want to make on the market. I want to buy into an extreme move and then sell it higher.  I specialize in short-term trading. Whatever money I missed out on not going all-in long indices or FANG 3 or 5 or 10 years ago, is the money I want to make in a few days or even a few hours. I may or may not actually execute a winning trade, because trading is difficult and you don't always get what you want nor do you always end up following your plan to a tee. I have no position at the moment.

Here is a list of things I don't care about as far as forming my trade thesis or constructing my entries and exits:

1. Trump's tweets
2. What the Fed is doing
3. Whether it's still a bull market with all-time highs ahead in the near future
4. Whether it's now a bear market and there are lower prices ahead in the near future
5. Whether everyone on Twitter is bullish and thus we "have to go lower"
6. Whether everyone on Twitter is bearish and thus "the bottom is in"
7. #4/5 except replace Twitter with CNBC or Retail Investors or Dennis Gartman, or anyone
8. Death crosses
9. Macro-economic data
10. Historical ratios like P/E or yield
11. Analyst price targets
12. Trade war or Tarifffs
13. Politics
14. "Why" we went up the last 9 years, whether because of QE manipulation or "real buying" or whatever popular narrative that's out there

There are some things on that list, namely #3 and #4, that I have some opinions about that might guide me in a different context but doesn't matter yet.

There is one thing I care about and it affects my risk tolerance and conviction level. It belies why I am interested in this trade at all.

U.S. equities have been in a centuries long uptrend and buying the dip is basically an undefeated trade. It has survived multiple World Wars, The Great Depression, The Cold War, Watergate, 9/11, 2008, and whatever else you can name. While most citizens of other countries view their stock market as gambling, buy and hold has become an American cultural phenomenon. There are "bigger forces" at play here that are not to be easily dismissed.

For the average investor, it will probably work out to buy at these levels. That being said, I don't want to be too early because I lack the patience to endure the potential years of drawdown in order to let this trade work out. Entries and exits will matter. Leverage and timing are either going to be my best friends or my worst enemies on this trade.

I see it like this. I see a rubber band. It's stretching a too far to the downside. At some point, it will release and go the other way just as violently, regardless of anything above. What happens after that--when the rubber band snaps back and then loses it stretch in either direction--is not something I need to know.

Merry Christmas and happy trading to all in 2019. One goal for 2019 will be to write more frequently.

I made one trade so far. A very modest day trade on a 3x ETF, far cry from the potential profit one could infer I wanted from the above post. Equivalent move on SPY was 236 to 240. 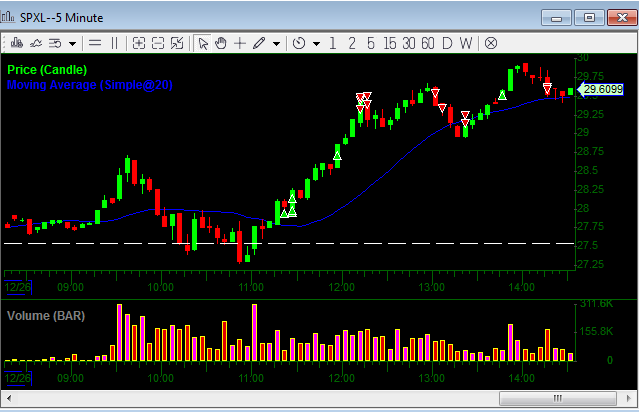